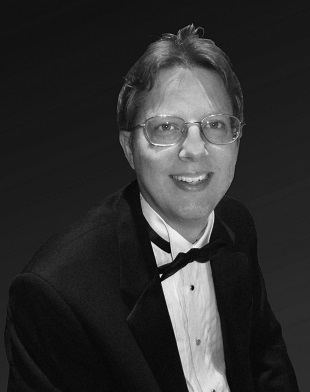 Dr. Eric Wilson is accompanist for TheChorus and the Chamber Chorale. He has served as an accompanist for various student and faculty recitals for almost twenty years. He has also served as a staff accompanist for the American Horn Competition and the regional National Association of Teachers of Singing competition. He received his Bachelor's degree in piano performance from the University of Alabama in Tuscaloosa in 1997, where he studied with Amanda Penick. Eric also served for five years as the accompanist for the Alabama Boychoir, under the direction of Karen Nicolosi. In addition to touring with the Alabama Boychoir in Canada and Italy, Eric has toured with the University of Alabama Jazz Ensemble, performing with them at the 1998 Notre Dame Jazz Festival.

Eric has won several awards and accolades in music. In 1997, Eric received both the Wilbur Rowand Prize and the Outstanding Senior Award from the University of Alabama School of Music. He finished 4th in 1994 and 3rd in 1996 in the state Federation of Music Clubs collegiate level piano competition, and won the Birmingham Music Club collegiate level piano competition in 1996. Eric was honored as the Alabama Outstanding State Accompanist for SATB choir in 1992. He was also inducted into University of Alabama chapter of Pi Kappa Lambda (music honor society) in 1995.

Eric has been serving as the Director of Music Ministry at Epworth United Methodist Church since January of 2008. His previous church service includes work at Christ Episcopal Church in Tuscaloosa (tenor section leader), at Alberta United Methodist Church in Tuscaloosa (church pianist), and at First Baptist Church of Enterprise, Alabama (church pianist). He studied conducting in college under Dr. Sandra Willetts, and regularly sang with her premier choir (the University Singers).

Eric received his Doctorate in Engineering Science and Mechanics from the University of Alabama in Tuscaloosa in 2001. He works full time as a systems analyst for Delta Research. His wife of fourteen years, Nicky, is an active pianist, accompanist, and teacher in her own right. They have two children.